We're currently shipping the bulbs "in the green" which means they have foliage on them. Plant immediately once you receive. The red spider lily is our "signature bulb" and we love seeing it thrive for our customers. The red spider lily can be planted late-spring through fall, sending up winter foliage that dies back into dormancy during the summer, until your breath is taken away with its sudden fall blooms. Red Spider Lily foliage needs at least a half-day of full winter sun to thrive. Remember too, that the red spider lily bulb performs well under trees that lose their leaves during winter, allowing the bulb's foliage to soak up sun energy. They are prone to skip their first-year bloom. This happens often when the bulbs spend too much time out of the ground—this time out of the ground is necessary to ship them.  However, once established in your garden they are there for a life time!
Red Spider Lily Behavior
These red spider lily bulbs are triploid, hard-working mules! The red spider lily has proven itself to be Texas tough, standing up to drought and extreme summer heat over many decades. The red spider lily bulb multiplies with new bulb offsets quite readily. It also produces more bulbs and larger flowers than its modern counterpart from Japan. Some say that the flowers bloom two weeks after the first good fall rain. If there is no rain during the month of September, the bulbs have been known to not bloom altogether. The red spider lily foliage follows the flower, staying green well through the winter and into late spring. As a good "rule of thumb" for most bulbs, plant at a depth about three times the height of the bulb.
The History of the Red Spider Lily
In 1854 Commodore William Perry opened the ports to Japan aboard some of the U.S. Navy's first steam powered ships while under orders from President Millard Fillmore. Aboard one ship in the fleet was a certain Captain William Roberts, who had a keen eye for horticultural treasures. While in Japan, Captain Roberts acquired three bulbs of a plant with red spidery type blooms. His niece would later described the bulbs as being, "in such a dry condition that they did not show signs of life until the War between the States." These three bulbs survived and eventually thrived in their new North Carolina home before spreading across the Southern U.S.

Also known as the hurricane or surprise lily.

While deer will eat anything, red spider lilies are more resistant to their urges than many other ornamental garden products. They definitely leave the foliage alone, but can be attracted to the bright coral orange/red flowers. Many times they leave them alone, but sometimes they will eat them.  So the answer to this question, is that they are mostly resistant, depending on how hungry the deer are.  Remember, humans ate tulips during times of hunger/famine, yet tulips definitely aren’t on our menu either. 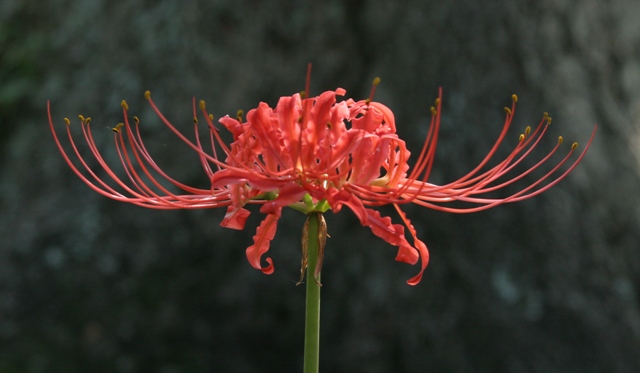