One summer morning, the family group text string began dinging notifications with pictures of nephews and nieces starting school! It seemed so early, but then I realized September was only a few weeks away, and that meant it was almost time for the schoolhouse lilies to bloom.

Also known as the "oxblood lily," these hardy plants make yearly appearances in older neighborhoods and abandoned homesites across Central Texas. This bulb is sometimes called the "schoolhouse" lily because it blooms near the beginning of the school year, which used to begin later in the year. Seemingly out of nowhere, a good late summer rain will cause these flower bulbs to pop up their blooms and display a deep red vivid show of flowers on naked stalks. This occurs just as summer is coming to an end and early fall is beginning. Grassy lawns with no irrigation and empty lots are a crispy brown due to the lack of rain we often experience in late summer. One soaking rain can trigger the bloom, and the vermillion red against the dried grass makes for a striking display!

These bulbs are historic and were passed from one Texas gardener to another starting in the late 1800s and continuing through the 20th century. Even today, they are a favorite pass along plant. The Oxblood lily flower bulbs are guaranteed to bring a touch of charm to any garden. 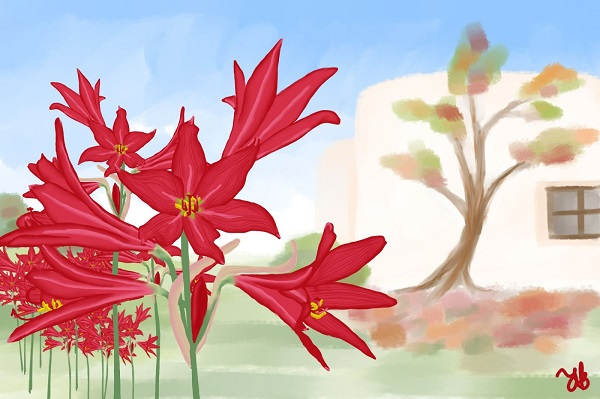 The tough little harbinger of fall.

Originally a native of Argentina, these naturalized bulbs were introduced to Texas by a German botanist and were heavily passed among German and Czech settlers. Botanically they are known as Rhodophiala bifida, and the common "oxblood" name refers to the vermilion-red, amaryllis-like flowers that they produce. They bloom in full sun, but the flower blooms hold up best when they can bloom in partial shade away from the occasional 100 degree sun. They grow their foliage after the bloom, during the winter, and they really need at least 6 hours of winter sunlight a day. In other words, that shady spot where they bloom in late summer can be under a deciduous tree (the kind that lose their leaves in the winter) which will in turn allow them to grow quite healthy with full sun in the winter. You can leave oxblood lilies undivided for years, and they will come back and bloom more prolifically each year They bloom around September and their foliage remains green all winter.

As a good "rule of thumb" for Oxblood lily flower bulbs, plant at a depth about three times the height of the bulb itself. This can be confusing with their sometimes long neck, and if the neck is very long, simply have a small portion of the top of the neck above the soil, or plant your bulb sideways. It will eventually turn itself up and the blooms will hardly be affected the first year, and not at all in future years. 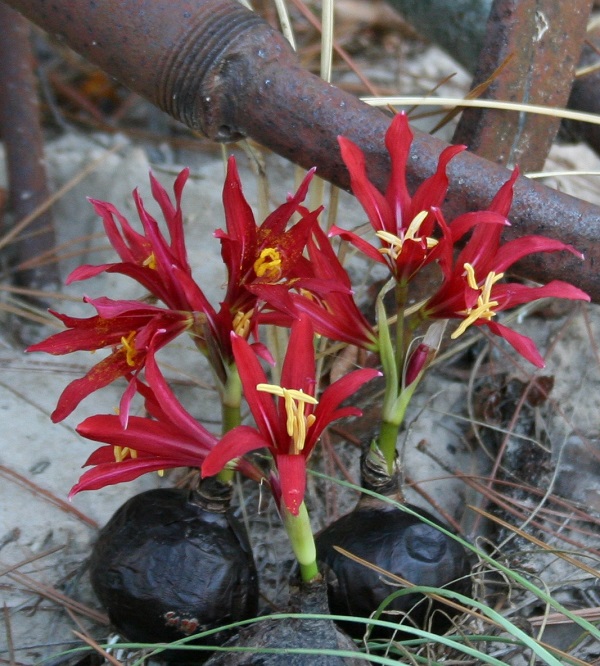 More about the "Schoolhouse lily" 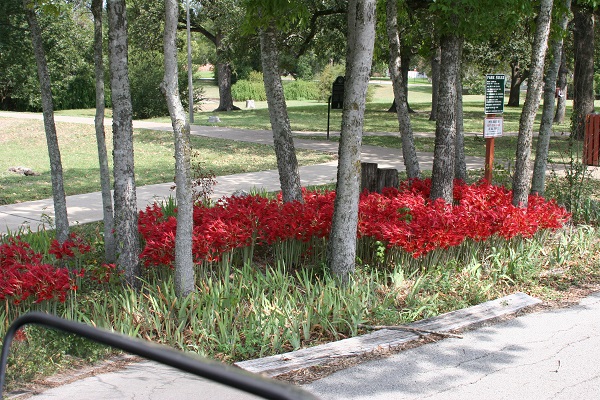 Landscape and Maintenance: The schoolhouse lily will grow to about 10-16 inches tall. These breathtaking beauties actually flourish in the August/September heat and humidity in the southern United States. They are extremely adaptable to a wide range of soils. They can even thrive in heavy clay, but as with most bulbs, do not try growing oxblood lilies in boggy soils. They like to be drier during the summer months when they are dormant. Because of how well they do in a variety of soil, the lilies look amazing in rock gardens or stretched out along pathways. They make dramatic displays when they are clumped focal points.

As a good "rule of thumb" for the bulbs, plant at a depth about three times the height of the bulb itself. This can be confusing with their sometimes long neck, and if the neck is very long, simply have a small portion of the top of the neck above the soil, or plant your bulb sideways. It will eventually turn itself up and the blooms will hardly be affected the first year, and not at all in future years. If you water them 2-3 times a week for a couple of weeks after planting, that will help them adjust to their new home. In the future, the roots will actually pull the bulb down in the soil to help protect it in the cool soil below so when you are ready to divide or share your bulbs be sure to dig down deeper than you think you should. Plant your flowers with 2-3 bulbs per clump for a more natural-looking display. They will multiply quickly from offsets and established large clumps of bulbs are valued for their strength and endurance.

Flower Bulb Details: There are so many things that we can talk about with these impressive red flowers it is hard to know where to start. Animals: Hummingbirds and bees adore this bloom. We aren't really sure which plays a bigger role in the attraction, whether it is the deep red color or the fact that there are fewer blooming options this time of year.  Unique: Outside of Central Texas you really don't see the oxblood lilies very often. There are no doubt anthropologic stories to be discovered by the presence of the bulb, and hopefully this can be explored more in the future.

How They Bloom: Now is a great time to plant oxblood lilies. They can have a full year in the ground before they are expected to bloom. However, you should see foliage in January-April, even if you don't have a first year bloom. Be sure not to cut the foliage, so that the bulb can take in nutrients all throughout its growth cycle. Oxbloods act very similarly to red and yellow spider lilies. They bloom in the fall and then have foliage for the winter. This is contrast to most flowers that produce their blooms after you have watched the greenery grow first. These lilies are dormant in the summer. Then the flowers suddenly appear with the first later summer and early fall rains. After the flowers die back, the bulb sends up strappy, bright green foliage to take it through the winter and give you some lovely greenery to compliment your spring blooms. 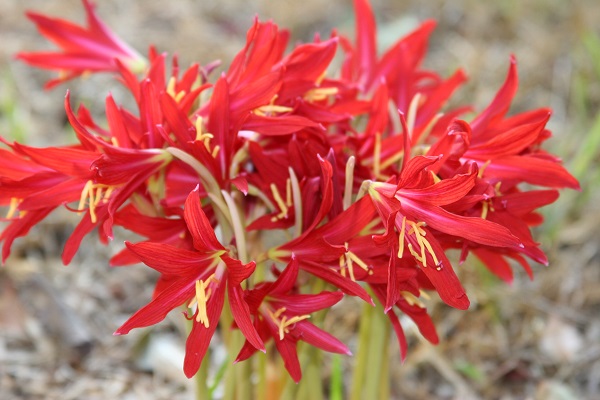 Blooms Themselves: Each schoolhouse lily bulb can bloom for 1-2 weeks with stalks that produce 5-6 flowers. Since all bulbs do not produce at the same time, you can often have blooms for around 3 weeks. Each bloom is only open for 2-3 days in the bright summer sun, but they will last longer with cloudy days or if they are blooming in the shade. Some gardeners criticize this shorter bloom time, but many over look this objection due to the vibrancy of the blooms and remembrances of some years when they stay in full color for a few weeks. ​​The blooms themselves look very similar to the Hardy Amaryllis which blooms in the spring. The schoolhouse lilies are not in the same genus as the amaryllis but they have a similar trumpet shape that reminds gardeners of them.

Companion Plants: Because of the green foliage through the winter, you have so many things that you can plant with your schoolhouse lilies with to really highlight their non-blooming season. Consider planting with the red and yellow spider lilies which also give you even more greenery during the winter months. They can be planted with narcissus and daffodils so that the additional greenery compliments the daffodil blooms in the spring. You might also consider catmint, bronze fennel, clover fern, or several other plants that the oxblood lily would look great blooming next to in September.

Remember you're planting a story, and these bulbs are for a lifetime! 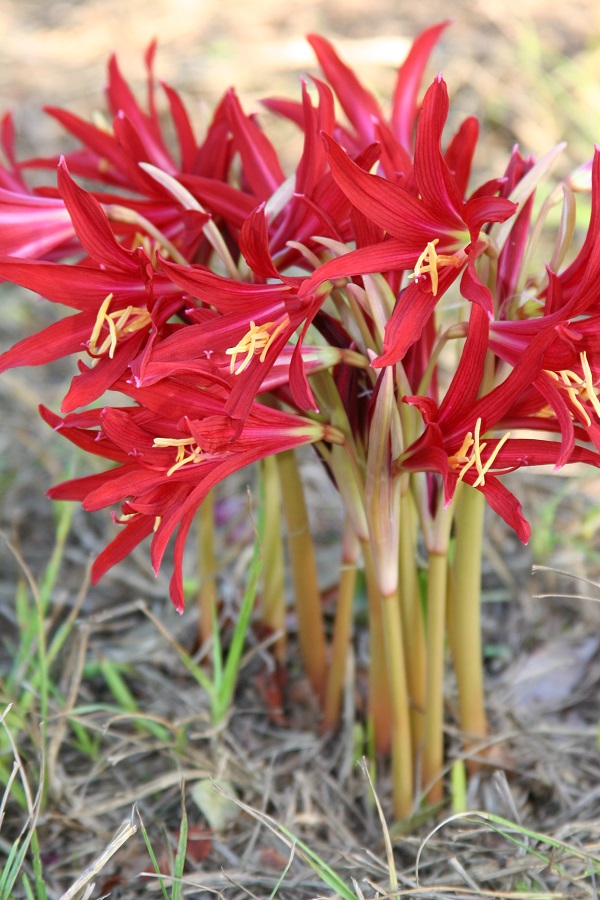 What does “in the green” mean?

In the summer and fall, we ship dry bulbs that many consumers are familiar with. However, in the spring we ship some flower bulbs with their foliage still on them because the bulbs are growing and have bloomed or are preparing to bloom. Do not be concerned if the foliage is yellow when you receive the bulbs. That is normal. When the customer receives them, the foliage is in the process of drying down naturally. Plant the bulbs, with foliage and all in the ground and let the foliage turn brown and die back naturally.   Another option is to not plant the flower bulbs and store the bulbs with the foliage in a cool, dark, and well ventilated spot, and most importantly let the foliage die down naturally. In other words, DON'T cut the foliage of bulbs when you receive them in the green. The browning and dying back of the foliage is the natural process of the bulb sending food and energy from the leaves down into the bulbs for their summer dormancy. There are pros and cons to buying bulbs "in the green" in the spring as opposed to dry in the fall.